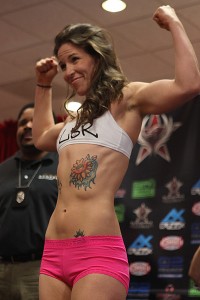 The Ultimate Fighter Nations Finale goes down on April 16 in Quebec City. Sarah Kaufman was scheduled to face Shayna Baszler. Baszler suffered an injury. The UFC got Amanda Nunes as a replacement. Nunes then suffered a broken hand. Now, a week away, Kaufman has a third opponent lined up. Leslie Smith will make her UFC debut against Kaufman. These two actually fought a year ago at Invicta FC 5, where Kaufman won.

The UFC announced the fight on Tuesday. Smith is coming off of a losing effort against Barb Honchak at Invicta FC 7. Kaufman is also looking to rebound, after she lost to Jessica Eye back in October at UFC 166. The decision loss was later overturned when Eye failed a drug test.

Lets hope this one sticks…