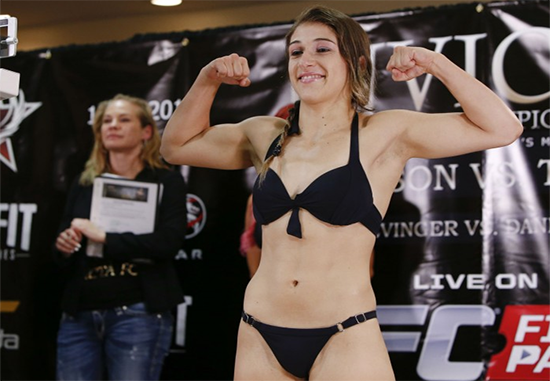 Critics claimed Tiburcio was just another punching/kicking bag for Waterson to beat up, but she proved the naysayers wrong when she dominated Waterson for three rounds straight. She did an amazing job dictating where the fight went, making Waterson fight HER fight.

Tiburcio obviously wanted nothing to do with Waterson standing, so she used her pressing grappling skills to drag the fight to the ground. Waterson almost pulled off a couple armbars, but Tiburcio was privy to her tricks and escaped with ease.

As Waterson walked back to her stool after the first round, you could tell she looked lost and defeated. She did not sport her usual swagger and confidence, but she was rocking a serious mouse under her left eye. The mouse restricted her vision which did not affect the turn of events of the fight as the majority of it took place on the ground.

After back and forth action, the opportunity presented itself for Tiburcio to lock in a guillotine. She grabbed a hold of Waterson’s neck and dropped to her back and cranked the submission. Waterson did not fight the hold for long as she knew she was trapped, and she finally submitted.

Hercia Tiburcio def. Michelle Waterson by way of Submission (Guillotine) 1:04 of Round 3