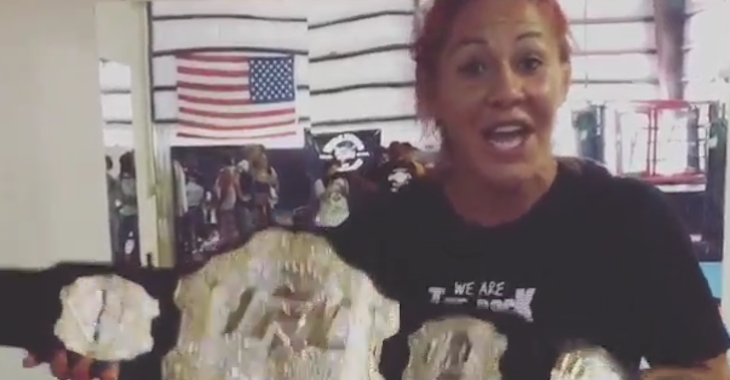 Even though Ronda Rousey’s next opponent is already lined up, Cristiane “Cyborg” Justino is not backing off the trash talk. Tito Ortiz has chosen to keep quiet on trying to make Rousey/Cyborg happen, but “Cyborg” knows a payday when she sees one.

After Rousey’s quick disposal of “Pitbull” Bethe Correia at UFC 190, fans and fighters alike were clamoring for the UFC Women’s Bantamweight Champion to finally fight “Cyborg”. After almost two weeks of speculation and rumors, UFC President Dana White laid the rumors to rest that the fight would take place at “Cowboy’s Stadium” in Dallas, Texas; Ortiz’s previous claims that it was happening were false and White didn’t even have the stadium booked.

Of course, it was soon revealed that Rousey would be squaring off with Holm at “UFC 193” in Melbourne, Australia. “Cyborg” knows that Rousey cherishes her title, so she wants to make it clear that she doesn’t mind if “Rowdy” puts the title on the line or not… “Cyborg” has her OWN title!

Who do you think would walk out on top in a fight between “Cyborg” and Rousey? Share your pick in the comment section below!