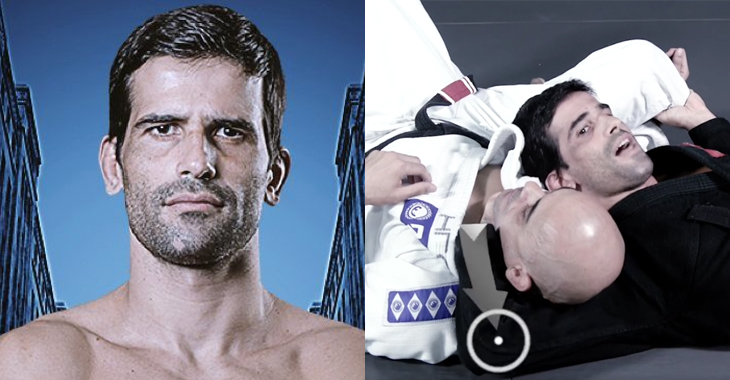 Three-time Brazilian jiu-jitsu world champion Eduard “Rigatto” Novaes has over 20 years of experience on the mat. He is a third degree BJJ black belt under Master Elcio Figueiredo. He also holds a silver medal at the Brazilian Nationals and is a three-time Sao Paolo State BJJ Champion.

So when he demonstrates how to do a certain technique, it would be best that we listen carefully. One of the more underutilized chokes in BJJ is the rolling collar choke. Adding this particular choke to your arsenal is a wise move as it can come from seemingly out of nowhere. In a recent video by Evolve Vacation, Novaes demonstrates the proper technique involved in executing a successful rolling collar choke.

The first step involves controlling the opponent’s right collar. Novaes tells students to grab the collar with your opposite hand across your opponent’s chest, placing the fingers inside the Gi. Step two Novaes says is to step back with the left leg.

At this point Novaes anticipates the opponent trying to sit up and go for the sweep. As soon as the opponent does that, Novaes says to use the hand to trap the opponent’s head behind the armpit.

Add the rolling collar choke to your submission arsenal!https://evolve-vacation.com

Check out the rolling collar choke by Eduardo Novaes

Now in the d’arce choke position, Novaes then goes for the opponent’s right leg and rolls forward. The right elbow is now driven towards the mat to apply pressure, completing the choke.

It’s an effective maneuver when done correctly, and one that your opponent will not see coming.

Novaes discovered Brazilian jiu-jitsu as a teenager in the 1990’s. Inspired by watching MMA in the early days, he witnessed a pioneer use submission expertise to nab the victory.

“I was 15-years-old when I saw Royce Gracie fight in MMA,” said Novaes. That was the turning point. From then on, Novaes started studying BJJ.