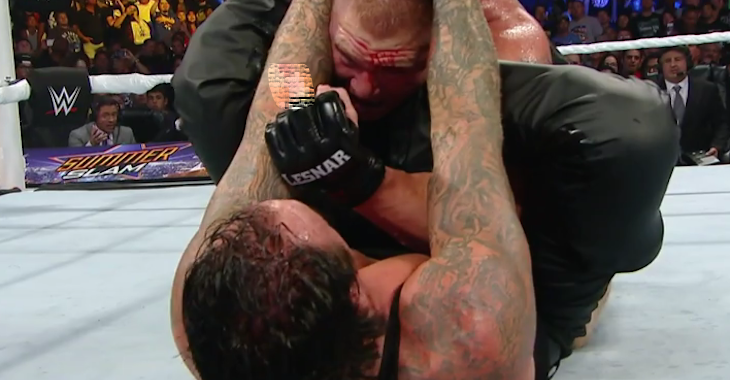 The Undertaker shocked the world when he returned at “WWE Battleground” to cost Brock Lesnar his chance at regaining the WWE World Championship. Tonight, “The Phenom” shocked the world once again when he handed Lesnar his first non-DQ loss in professional wrestling since 2013!

“The Beast Incarnate” was in control early, utilizing his strength and power to take The Undertaker to “Suplex City”. Undertaker lived up to his nickname of “The Deadman” however as he kept rising from the dead despite eating several suplexes and F-5s. After Lesnar dished out another F-5, this time through a table, it seemed as if The Undertaker was going to lose by way of countout. He made his way into the middle of the ring at the count of nine and blasted Lesnar with a HUGE chokeslam and Tombstone combination!

Lesnar had taken a fair amount of punishment at this point as well and was a bloody mess. Lesnar kicked out at two and proceeded to mock The Undertaker by sitting up like the “Deadman” used to and laughing at him. The Undertaker returned the taunt which led to a punch-for-punch brawl breaking out!

Brock Lesnar flipped him the bird and proceeded to pass out, forcing the referee to wave the match.