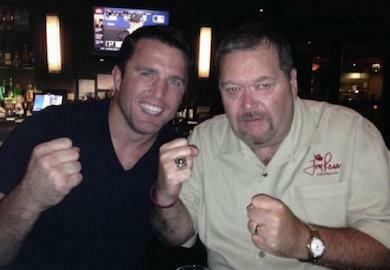 Fan’s who purchased the BattleGrounds MMA pay-per-view last Friday were treated to quite a night of commentary. Not only did you get to watch an old school one-night tournament, but you got to listen to play-by-play from Chael Sonnen and legendary pro wrestling announcer Jim Ross. It was different from the normal MMA commentary we’re used to getting, but was plenty entertaining.

BJPENN.COM Radio had the opportunity to speak with Ross before his first MMA announcing gig. Read below to find out how the match made in heaven came to be:

“I’ve always wanted to do a play-by-play for an MMA fight, I just never thought that the opportunity to do one, do a Pay-Per-View or TV show would probably come my way at this stage in the game. So I said yeah I’m interested. So my manager and Brian [O’Rourke, Battlegrounds president] put the deal together and then I told my manager, you know there are two things that I’ve got to have and neither of them are really about the money. One, I got to be able to get to Fort Worth on Saturday to see the Oklahoma Sooners play the TCU Horned Frogs after the PPV and secondly I’d like to have at least a little input on who I’m going to work with. Because I need someone that’s really got great product knowledge and that I felt like I could have some chemistry with, so we could have an entertaining broadcast. I realize a broadcast is about the fights and the fighters, I’ve always known that about anything I’ve ever broadcast, but you know, you want to have some chemistry, or think you have some chemistry with your partner. And I knew that Chael [Sonnen] was available, you know with him getting cross-ways with the Nevada State Athletic Commission and then leaving UFC, and then leaving FOX, it seemed like he might have some time on his hands. So I gave him a call and said ‘hey look I’ve got this opportunity, I’d love for you to work with me and I think our chemistry would be good. I’ve got a gut feeling we could have a hell of a broadcast here you know’. He was interested and the Battleground folks got with him and they did there deal, so that’s the team. So I’m really excited about working with Chael.”