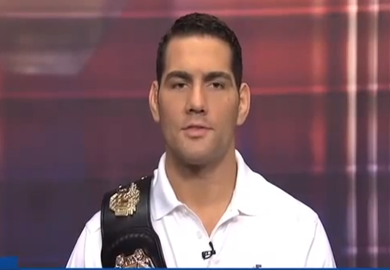 “You have no idea what is going to happen when you get into the Octagon. If you have any insecurities at all, [Anderson Silva] will expose that — he’s going to bring them out and make you pay. He’ll put his hands down, he’ll put his hands on his hips, he’ll talk and make you feel like you don’t belong in the Octagon with him. I knew what he was doing. I just had to remain mentally strong and confident. And that’s what I did. I was prepared [for the clowning], but I did react. I was like, ‘How dare you, you’re doing this to me?’ Are you joking? I had that attitude. I’m like, ‘You’re not even hitting me — you’re taunting and taunting. Hit me in the face, I don’t care!’ That was my attitude, but then it got to the point where I’m throwing punches until I land and crack him. And that’s how I finished the fight.”