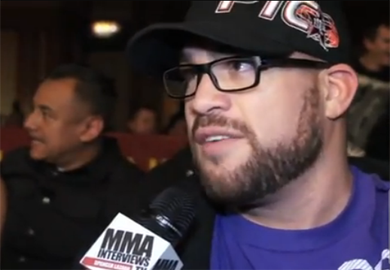 “Let’s do a rematch and have a chance of her cutting to 135-pounds, possibly, if it’s possible she can do it. It’s just really tough, like I said. Just being with Cyborg and wrestling her myself, she’s a big girl. To make it down to 135-pounds, it would be kind of health threatening, I think. But at the same time, I would love for the fight to happen. Let’s meet in the middle.

“For a woman to cut that much weight… You gotta understand, she’s small. She’s cutting from 170 down trying to make 135, that’s a big, big, big, big cut. That’s a lot for a woman to cut. And it’s just health reasons when it comes down to it. We want to see an exciting fight. Do it at 140-pounds, I think that would make the best difference.

“I support Ronda Rousey. I hope she does well and I hope she wins. I think the biggest fight in women’s mixed martial arts is Cyborg vs. Ronda Rousey. At the same time, I wish Ronda can win the fight and just keep building for this big fight to happen.”