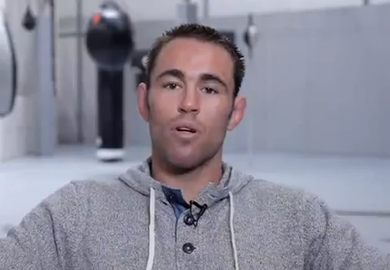 “I think Tyron, he’s a tough guy, but I have a lot more experience. Great wrestler, All-American wrestler, heavy hands. He’s a tough guy but I think I have a lot more experience and just advantages everywhere. Wrestling is pretty even but I think striking I can beat him, I can beat him on the ground and tap him. I feel like it’s my time. I want to go out there and bring a lot of pressure and break him. His jiu-jitsu is not bad but I don’t think it compares to mine. He does have five or six submission wins so he isn’t someone I’m looking at as no jiu-jitsu. I just think he’s clearly not at me level, though.

I was a little surprised at Tyron Woodley, I was hoping to fight someone in the top five like Ellenberger again or Condit or Rory MacDonald. I was hoping to get one of those huge names but Tyron Woodley is a respectful opponent. I think he’s ranked around 10 or somewhere around there. He’s coming off a big knockout, he certainly a worthy opponent so I can’t complain about the fight. He’s coming off a huge win over Jay Hieron. He came out and dropped him right away and put him down, so he showed he deserved big fight by that win. I think I’m a big step up in competition for him but he’s earned his shot. I need to go out there and not only win the fight but also finish him. I want to go out there and win by either knockout or submission.”