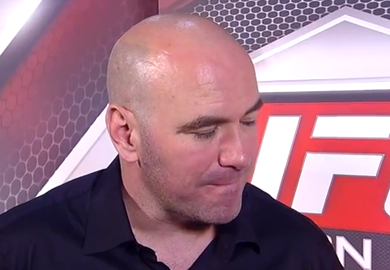 UFC President Dana White discussed an epic night of fights at UFC 160 with UFC Tonight’s Ariel Helwani. White broke down the amazing Velasquez vs Bigfoot main event, the next big heavyweight fight and more ground breaking UFC news that will get any MMA fan excited for the future.

On Velasquez’s Victory In The Main Event:
“I think Cain is the best heavyweight in the world.”

On Dos Santos’ Knockout Of Hunt:
“Great way to finish a fight. Mark Hunt is a tough guy – what Mark Hunt has accomplished at his age is incredible; he’s almost my age. I barely did 12 pull-ups the other day, this guy just went three-rounds with Junior dos Santos. Very impressive, I give Mark Hunt all the credit in the world.”

On Mike Tyson’s Presence At The Event:
“For a guy like me that’s such a huge fight fan that came from boxing. Mike Tyson was one of the heros like every other man on this earth. He’s like the Justin Beiber for grown men, when he walks in the room guys get giddy and all the fighters go crazy.”