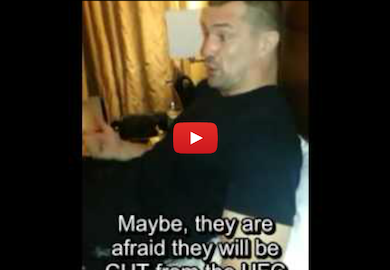 Apparently a bunch of UFC fighters the likes of Jon Jones, Frank Mir, Alistair Overeem and Fabricio Werdum were in Russia recently and attended a regional MMA event titled Legends 2.

While there they made no friend of Mirko Cro Cop, who can be seen in the video above calling for their termination.

“I don’t know what to say. It’s nice that they came, that they graced us with their presence. But on the flip side, I think Dana White is going to grow his hair back when he sees them here. Jon Jones is the light heavyweight champion. Werdum is fighting Cain next for the heavyweight belt. Those are people under contract with UFC. Now they come over here as guests. Do your seminar, okay? Do the seminar and go. They came over, sat in the front row at the press conference. Took photos. All of that sends a bad message.

I would never do that, never. If I am under contract with another organization, whether it be UFC, PRIDE … if I’m under contract — and they all are — under a multiple fight UFC contract, I would never do it. Do a seminar maybe, but I would never appear at a press conference, let alone stand in front of banners that have a logo of a different organization. We all took photos together. I’m the main event. Unbelievable. They basically came over to promote a totally new organization. Dana White is going to go mad, 100 percent, totally justifiable in my opinion.

I would go mad, too, I would fire them all. Of course, those are fighters who bring the UFC money, but they didn’t think it through and it comes off unprofessional. I would never do that. Dana White’s hair is going to grow back for sure when he sees this. Mildly put, I think Dana White is going to be pissed off!”