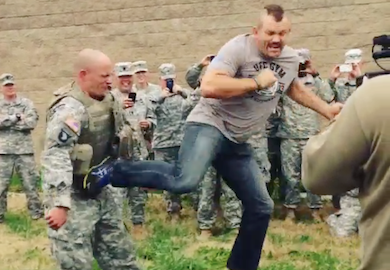 Former UFC light-heavyweight champion, Chuck ‘The Iceman’ Liddell is giving back to the troops this week as part of the UFC Fight for the Troops experience.

While on base, Chuck gave a soldier what he asked for, and that was a kick to the body to test his armor.

A soldier asked me to kick him wearing his iotv kit so I obliged 😄
http://t.co/1upuwVCByk