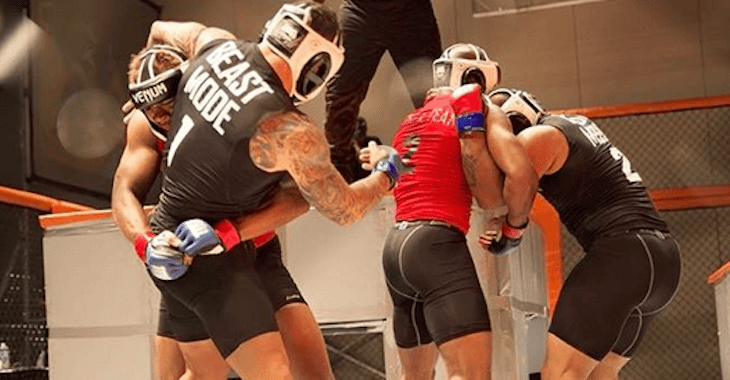 Fans of mixed martial arts fans know there are moments within our sport where you just have to scratch your head and give it a shot. When Bellator announced they signed Kimbo Slice and would be putting him into the cage with Ken Shamrock, it was a confusing decision to say the least. However, it was simply a fun fight and brought a lot of new eyes to the lesser-known talent on the rest of the card.

For all we know, two-on-two mixed martial arts could be the next big thing. Past prototype events like “Hip Show: Arena Combat” have proven it to be a work in progress, but the people behind “Arena Combat: American Battleground” have proven it to be a successful idea. The first ever sactioned team-based MMA event took place on American soil on Saturday evening and featured UFC and Bellator veterans Rodney Wallace and Adrian Miles.

Casey Oxendine, one of the men behind the promotion, said the following on MMA.TV when he received criticism for his show:

“This show was NEITHER “unregulated” NOR “uncontrolled”!! This was announced and publicized as the FIRST STATE SANCTIONED TEAM FIGHTING EVENT IN U.S. HISTORY. That means that we were approved, regulated, and overseen by the South Carolina Athletic Commission. We paid commissioning fees for their inspectors, referees, judges, and timekeepers. In the eyes of the law, this event was NO DIFFERENT than any other combat sport overseen in the state (as we provided the insurance and medical requirements asked of us).”

Check out some of the images from the show: