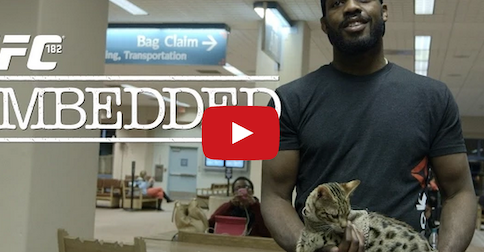 On episode #1 of UFC 182 Embedded, two bitter rivals zero in on the task at hand, intensifying their training as their title bout draws near. UFC light heavyweight champion Jon Jones polishes his game plan, then heads to the airport with an exotic Savannah cat for a wheatgrass toast and a flight to Vegas. Number-one contender Daniel Cormier continues his efforts in San Jose, California, fueled by his long-brewing feud with the current champion. Lightweight Donald “Cowboy” Cerrone goes snowmobiling in Colorado to get his mind off his impending co-main bout; on the San Diego coast, his undefeated opponent Myles Jury takes a more mellow approach to pre-fight preparations. UFC Embedded is an all-access, behind-the-scenes video blog series focusing on the days leading up to the hotly-anticipated UFC 182: Jones vs. Cormier event, taking place Saturday, January 3, on Pay-Per-View.