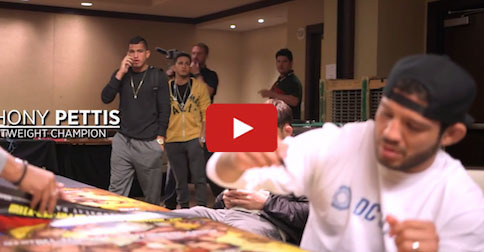 On episode #3 of UFC 181 Embedded, the mood is light as the stars of the fight card arrive in Las Vegas, including heavyweight foes Brendan Schaub and Travis Browne. Main event star and welterweight champion Johny Hendricks and opponent Robbie Lawler both spend some downtime shopping at very different retailers. Lightweight champion Anthony Pettis and his challenger, Gilbert Melendez, narrowly avoid a run-in in the UFC office. UFC Embedded is an all-access, behind-the-scenes video blog series focusing on the days leading up to the two title fights at UFC 181: Hendricks vs. Lawler II, taking place Saturday, December 6, on Pay-Per-View.