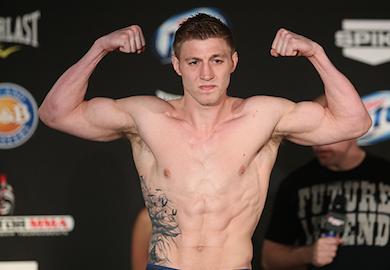 BattleGrounds MMA (www.battlegroundsone.com) announced today that hard-hitting finisher Trey “That Just Happened?” Houston (11-2) of Bixby, Okla. will replace an injured Josh “The Beast” Bryant(14-4) of Broken Arrow, Okla. in the highly-anticipated one-night, eight-man welterweight (170 pounds) tournament that will award it’s winner a grand prize of $50,000 at BOK Center in Tulsa on Friday, June 27.

In addition, a tournament reserve matchup between undefeated prospect Marcus “Milk” Sanchez (4-0) of Tulsa and Anderson Silva sparring partner Jordan Smith (18-6) of Kaysville, Utah has been confirmed for the event.  In the event that one of the tournament’s quarterfinal stage winners is unable to re-enter the cage for the semifinal stage due to injury, the victor of the reserve matchup will take the injured combatant’s place in the tournament.

“We want to wish Josh Bryant a full and speedy recovery.  We are saddened that he will not be able to participate in this landmark event for BattleGrounds MMA, but are excited to be able to give another one of Oklahoma’s finest up-and-coming mixed martial artists – Trey Houston – the biggest opportunity of his career,” said BattleGrounds MMA President and Olympic wrestling gold medalist Kenny Monday.

Unlike many of his fellow fighters, the 26-year-old, 5-foot-11 Houston, an explosive fighter who has produced all 11 of his professional victories by either (T)KO or submission, did not grow up competing in sports.  It wasn’t until he was 15 years old that he began playing rugby while living in Germany where his father, a U.S. Army serviceman, was stationed.  After moving back to Okla., Houston went on to play for the University of Tulsa rugby team and even enjoyed a stint with the U.S. national rugby squad.

Houston holds a master’s degree in geophysics from the University of Tulsa and has a full-time career as a field geologist for an oil company.

Only six months after he was introduced to MMA by a friend, Houston competed in and won his first amateur bout by submission inside the first minute of the first round.

In non-tournament, Superfight action on the card, Ryan Couture (7-3) of Las Vegas, Nev. will collide with Jonny “The King of Late Night” Carson (11-6) of San Francisco, Calif. in a lightweight (155 pounds) showdown and seasoned veteran Nicdali “The Night Queen” Rivera-Calanoc (8-7) of Tulsa, Okla. will battle Jen “Tink” Aniano (0-2) of Kalamazoo, Mich. in an atomweight (105 pounds) scrap.  Additional bouts will be announced soon.

Tickets for the BattleGrounds MMA event, priced from $65, can be purchased online at www.bokcenter.com as well as at Arby’s Box Office at the BOK Center, all ticket outlets, or by calling 1-800-7-BOKCTR.