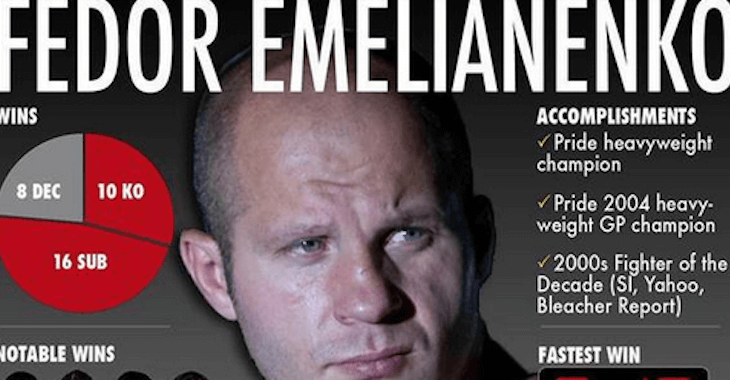 Fedor Emelianenko will not be fighting in the octagon nor will he be duking it out in the Bellator cage; “The Last Emperor” announced his signing with a new Japanese based promotion on Saturday night during “DYNAMITE”. The Japanese promotion has yet to be named but is run by one of the men behind the legendary PRIDE promotion, Nobuyuki Sakakibara.

Emelianenko’s history at New Year’s Eve shows is legendary, to say the least. The Russian possesses December 31st wins against Satoshi Ishii, Hong Man Choi, Mark Hunt, Zuluzinho, and Antonio Rodrigo Nogueira. Hunt is still tearing up the octagon and Nogueira just NOW retired— there is no doubt that Fedor has defeated some of the best of the octagon!

Of course, it was a disappointment when he announced his signing with a new promotion rather than UFC. But still, this is going to be an exciting event! It could be the return of PRIDE-style events and there’s nothing wrong with competition. Get hyped for Fedor’s return with the following infographic!

Do you think Fedor Emelianenko can help give this promotion the boost it needs to become a competitor in the world of mixed martial arts? Share your thoughts in the comment section below!