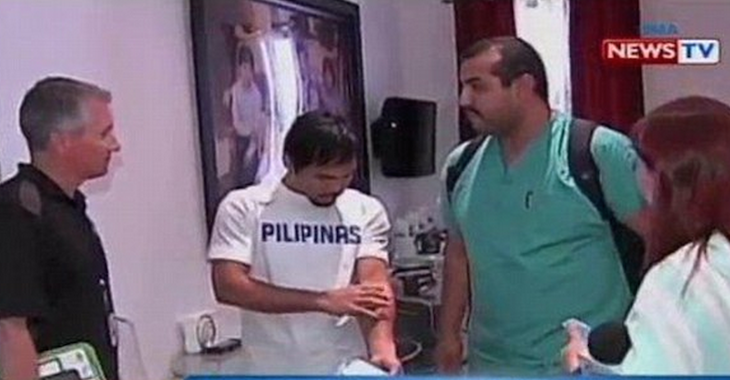 Floyd Mayweather has fired the first shots in the battle of drug testing between himself and Manny Pacquiao.

In accordance with their contractual agreement, Mayweather requested drug inspectors to pay a surprise visit to Manny Pacquiao for a random drug screening.

The Daily Mail has it:

Pacquiao was approached unannounced by an anti-doping examiner at the house he is renting in Los Angeles where he is preparing to face Mayweather in Las Vegas on May 2.

Both fighters are reportedly allowed to call for an additional surprise test under the US Anti-Doping Association programme to which they have both signed up.

Mayweather pulled the trigger first on Sunday, only four days after the packed red-carpet media event in LA which formally launched the build up to the $350 million richest fight of all time.

The inspector called at the house, where Pacquiao was relaxing with members of his team between work-outs with master trainer Freddie Roach at the fabled Wild Card Gym

The PacMan readily complied with tests for both blood – a process about which he had previously expressed his dislike – and urine.

‘No problem,’ he told the medic, with a smile.

Earlier, his promoter Bob Arum had made it clear that Pacquiao had issued a $5 million challenge to Mayweather with regard to the testing, and offered to surrender that amount should he fail the examination.