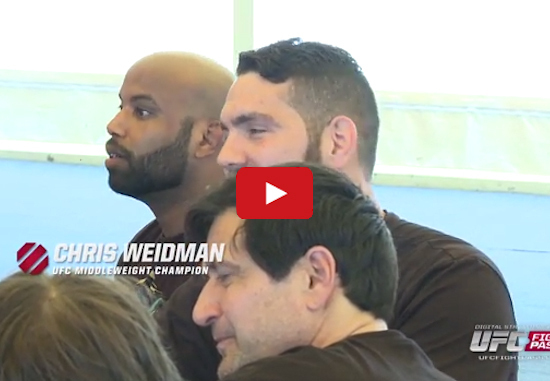 Fight Night Sydney headliners Michael Bisping and Luke Rockhold get in their final parting shots at the pre-fight press conference. Watch the pair of middleweights duke it out Friday night at Fight Night Sydney on UFC FIGHT PASS!

Weidman: “I think it’s going to be an exciting (fight). You know Bisping doesn’t go away, so he’s a tough guy with great heart. So it’s going to be hard to finish him but …I’m going to have to say I think Rockhold wins this fight.”

Bisping: Of course the Yanks, they stick together. You need all the help you can get (to Luke). We started this shit and we’ll finish this shit.”

Weidman: I hope for a good fight. I wanna watch a good fight and I’m hoping that it is. As long as the Tim Kennedy Bisping doesn’t show up, it could be a great fight.”

Bisping: “Hey, that guy’s never showing up again, but shut up Chris. This our press conference.”