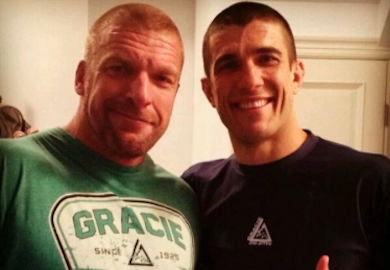 You guys are already mad at me for posting this ‘Pro-wrestling’ story.

This isn’t that fake WWE stuff, this is MMA! This is real fighting! (Your past comments have been well noted, I promise.)

Still though, WWE star ‘Triple H’ has joined the ranks of his compadres, ‘Batista’ and ‘CM Punk’, and is studying the martial arts under famed instructor, Rener Gracie.

We’ve recently seen the like of former UFC champion, Brock Lesnar, use submission holds in the WWE to win his matches and with the ever-growing enlistment of wrestler’s to BJJ could this be a sign of things to come?

Will the WWE blur the lines even further between the real and fake?