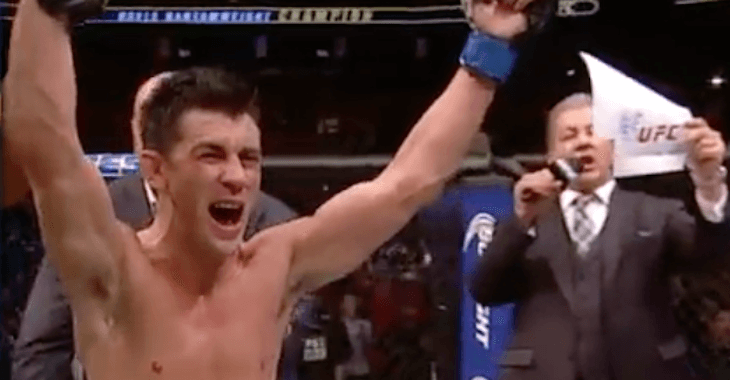 Sunday night in Boston Dominick Cruz had just his second fight in 4 years as he successfully defeated TJ Dillashaw to reclaim the UFC bantamweight championship.

Following the fight, fighters took to Twitter to react to Cruz’s triumphant return.

Dominick Cruz you are an inspiration to keep on keepin on my Muthatrucka……!!! You deserve all of bruddah!!!!… https://t.co/PHPSo4a6Gv

You mean, the foot—the foot that you do magical things on—was injured and you still fought like that?? #UFCBoston

There’s no such thing as rust. Rust does not exist unless you don’t train hard enough @TheDomin8r ✌#AndNew pic.twitter.com/3Mup9FTBhG

So happy for @TheDomin8r i knew it. the real ones always prevail #aclrecovery

Congrats @TheDomin8r and @TJDillashaw on an incredible display of heart n talent! That was next level shit. Tremendous respect for you both.

Congrats to my dawg @TheDomin8r !!!

I had @TJDillashaw , I think the Judges watched a different fight.

Congrats @TheDomin8r ! You have been through hell and two years later you get a belt you never lost! @UFC #Ufc

Congrats to @TheDomin8r on chasing your Dream and never giving up! You're the Champ #UFCBoston

Cruz is back!!!! Hopefully he didn't hurt his knee again, saw that limp. #UFCBoston

I swear @TheDomin8r you are my fucking hero!! Love you bro!!!

What an amazing feeling!! Well deserved win for Cruz. Must be hard having your belt stripped from you due to injuries. That's amazing @ufc

What a comeback story!! Congrats to @TheDomin8r I scored it for him @ufc

To put on a fight like that after one fight in four years is nothing short of astonishing. Win, lose or draw. #UFCBoston