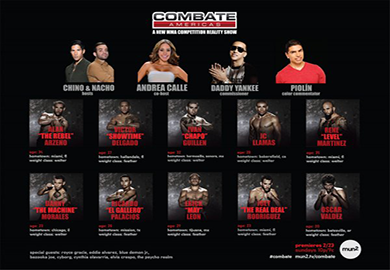 Even after acknowledging its fading fanbase, boxing will go down as one of the most popular sports of all time. It is a grueling contest that welcomes people of all shapes and sizes, but it is debatable a certain group of people have revolutionized the sport more than any other. Latinos have been putting on exciting contests in the ring for decades dating back to Kid Azteca in the 1930s. They are still a prominent part of combat sports today and men like Juan Manuel Marquez are reminding us of that.

Now, UFC co-founder Campbell McLaren and Combate Americas are looking to introduce a new generation of latino warriors to revolutionize the sport of mixed martial arts.

Combate Americas is a new mixed martial arts reality series that is set to debut this Sunday, February 23rd, on mun2. Latino welterweights and featherweights will be duking it out to see who in their respective divisions will be the first to earn a contract for Combate Americas. The series will provide viewers an in-depth look of who the fighters are, where they come from, and what led them to a career inside the cage.

Combate Americas welterweight contestant Danny Morales always believed he would grow up to be a fighter on television, but in another capacity. In a recent interview with BJPENN.com, Morales shared, “I would always tell people, ‘Watch. One day you’re going to see me on TV fighting…’ but I was referring to boxing at that time because I didn’t know anything about MMA.”

That was not the fault of a young Danny Morales, though, as most individuals were not aware of MMA in the early 90s. Campbell McLaren was busy trying to raise awareness about the sport by creating an event that would introduce thousands to the spectacle that is MMA; An event that was simply dubbed ‘Ultimate Fighting Championship’. With guys like Campbell McLaren behind the scenes and athletes like Royce Gracie performing their hearts out, it was assumed MMA would take off like it has. Fast forward twenty years and pioneers like McLaren and Gracie are mentoring undefeated prospects like Danny Morales in Combate Americas.

Campbell McLaren elaborated on how it felt working with people he has impacted like Morales in a recent interview with BJPENN.com. “It makes me really proud to be doing this. There’s a lot of good in this. I think that MMA and Combate Americas has helped turn lives around… Another way of looking at it is we may have discovered a really great new fighter [in Morales]. This guy is really, really talented and really fast.”

Despite Combate Americas putting on a reality show and future fight-cards, Campbell McLaren has made it clear that this is not a call for competition with other promotions. Besides putting on an entertaining product, the purpose of Combate Americas is to introduce the exciting sport of MMA to a group of potential fans that may not know a lot about it.

“My theory on this was that there is a great number of viewers that just aren’t so familiar with MMA,” McLaren stated. “I’m not sure it’s easy to walk in on the UFC with no knowledge… if you turn on the UFC it’s my friend Joe Rogan. Joe Rogan knows more about MMA than anyone in the world. He sometimes says stuff even I don’t understand! What I wanted to do was reach out to that group that have heard of it [MMA] but they’re not familiar with it and show them how cool it is.”

While McLaren is excited to introduce new fans to the sport much like he did 20 years ago with the UFC, fighter Danny Morales is eager to show new viewers how hard they work. “People who don’t watch MMA will have a lot more of an appreciation for the sacrifices that are made. We might even inspire new fighters… We may inspire people just to try it out as a hobby to lose weight…”

Danny Morales is one of those individuals who was inspired by just a glimpse of MMA. In one of his stints in juvenile hall, Morales was given a magazine that contained an article about BJJ in Brazil. From that point forward, he told himself he was going to be an MMA fighter. Now, he is a contestant on Combate Americas and is working with pioneers of the sport like Campbell McLaren and Royce Gracie. “Being mentored by Royce Gracie and talking with Campbell McLaren— some of the things they said were some things that I already applied to my day-to-day life. It only made me more confident in my direction with the sport and what I’m doing; I know I’m on the right track. I’m destined for greatness.”

While Danny Morales may be destined for greatness and a champion in the future, Combates Americas will have established MMA icons like Royce Gracie and champion Eddie Alvarez appear throughout the season to inspire the fighters and teach new viewers who the stars of the sport are.

The show will also see appearances from pop-culture icons such as pro wrestler Blue Demon and Psycho Realm. Reggaeton star Daddy Yankee will serve as the commissioner of Combate Americas and despite being a musician, he is not completely out of his element. Morales mentioned, “He fit right in. He was a very humble guy. He’s a hard worker for sure.” It isn’t surprising that Yankee took so fast to the sport considering he aspired to be a boxer when he was younger.

The new reality series is set to air on mun2, a network that McLaren is excited to partner up with. McLaren elaborated, “Mun2 is literally perfect for this. It’s a bi-lingual network. When Royce Gracie is on the show, Royce speaks English. When Blue Demon comes on, he speaks Spanish. I like that everyone speaks the language they speak.” Those who do not speak Spanish should not worry as there will be English subtitles when necessary. “The Spanish is going to be subtitled. My Spanish is really, really not strong so I am glad to have the subtitles.” McLaren joked.

One of the most popular episodes of ‘The Ultimate Fighter’ series is the season premier where the viewers get an in-depth look into the lives of the fighters and why they need the opportunity to get signed. Combate Americas expands the emotion captured in that one episode throughout an entire season and viewers will get to learn more and more about the contestants and why they are so thankful to have landed a spot on the show. McLaren explained, “Everyone of these guys are fighting for something that is bigger than themselves. It’s either for family or to help pay off something for their Mom or their kids… to prove that Mexicans can be great MMA fighters. All these guys come in and it’s not ‘I’m gonna be the best— I’m gonna show the world!’. It’s more like, ‘I’m doing this for my family. I want my kids to see you can make it in America. My mom needs a place to live and I need to make a living doing this’. It’s very different.”

The contestants on Combate Americas have something to prove to the world. Even though they may be lesser known than fighters you see in Bellator and UFC, they have just as much potential— if not more.