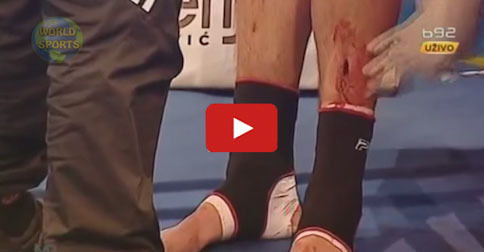 Retired NBA “star” turned pro kickboxer Darko Milicic came up short in his first career fight against Radovan Radojcic on Thursday night, this after he suffered a nasty leg wound, one deep enough to force the referee to stop the bout. Check it out:

For those who are not familiar, Darko Milicic was the second overall pick in the NBA’s 2003 draft. He was selected by the Detroit Pistons, this after the Cleveland Cavaliers selected Lebron James with the leagues first overall pick.

Darko won an NBA Championship with the Detroit Pistons in 2004. He retired from professional basketball in 2012.