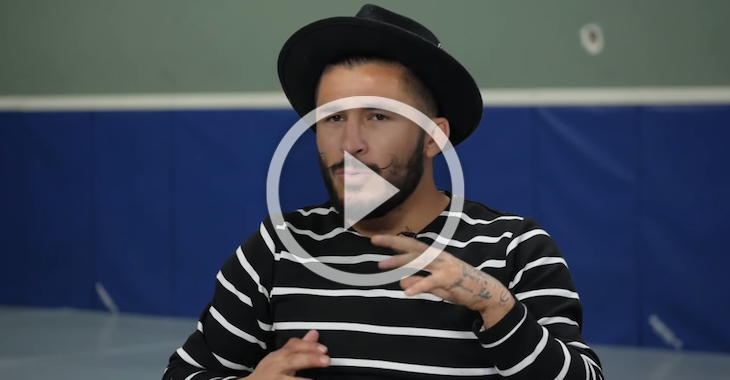 The feud between UFC flyweight Ian ‘Uncle Creepy’ McCall and the guys over at Team Alpha Male is sort of like a camp-fire you just can’t put out, no matter how many times you douse it with water and throw dirt on it. It just keeps reigniting. The back and forth started when McCall spoke in an interview and called the fighters of TAM a bunch of frat boys who walk around with their shirts off and do chest bumps. Members of the Sacramento, CA fight team didn’t take kindly to the comments and plenty of them spoke their desire to fight McCall in the cage, including current bantamweight Cody ‘No Love’ Garbrandt.

A few weeks back Lance Palmer, World Series of Fighting’s bantamweight champion and TAM member, told the story of when he and other members decided to act out McCall’s comments while they were in attendance, in the front row, during McCall’s walkout for his fight against John Lineker. He said he thought their actions (which included ripping their shirts off and chest bumping) distracted McCall causing him to lose that fight.
Now it seems as though he was right, and the proof comes from none other than McCall himself. Uncle Creepy recently did an interview with Rick Lee and talked about his hate for all things TAM.

“Joe, I want to fight Joe Benavidez. I’d like to, I need to beat up someone from Alpha Male and he seems like a good candidate and he’s ranked above me so, you know me I’ll fight anybody I don’t care. But to have all those douchebags kind of–like I literally walked out to the cage and I turned to my left and I saw, you know, like all those fu*king tools, shirts off, chest bumping, I couldn’t help but laugh. It was a little distracting, I’m not going to lie, it was kind of funny. Ok, you beat me last time you’re going to kick my ass again, just keep thinking that. Come on, let’s fight, you know, I’m going to put him back to sleep like DJ did.”

“I’ve always made fun of the Alpha Male guys, because we’re quasi friends, like what’s up dude, handshake friends, acquaintances maybe. They just push the douche card too– and I’m not going to lie, I’m a douche too, let’s get this out there, but they just–and this is going to sound even worse, I grew up fighting frat guys. That’s what we did in high school, or college, beat up frat dudes all the time. There was always kind of that like rubbing on each other, I don’t like these guys all that much and words were said and then I said something. Back and fourth and now I don’t know, we like talking sh*t to each other.”