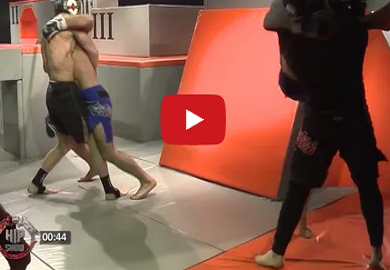 If Russian 5 vs. 5 team based MMA wasn’t crazy enough, today we bring you footage from ‘Hip Show’. Where fighters are on teams of 2, and battle in an obstacle course environment complete with rope swings, and insanely high padded platforms.

Fighters can earn points by successfully landing takedowns, knockdowns submissions, clean ground and pound, and for controlling the top of the large obstacle in the middle (similar to king of the hill). Check it out below and give us your thoughts.

According to an interview with Bleacher Report in 2013, Hip Show commentator said:

“This is realistic fighting,” play-by-play announcer Cyrus Fees told Bleacher Report. “If you were going to get in a bar fight or a street fight, realistically it’s often going to be two-on-two or two-on-one situations. We feel it’s a great way for these fighters to test out their martial arts and to create a really entertaining show for the viewers.”

As of then, the executives of Hip Show wanted to refine the rules to match the unified rules of MMA and bring Hip Show to America.

What do you think PENNation? Is Hip Show the next big thing? Or does it take away from the legitimacy of regular MMA competition?