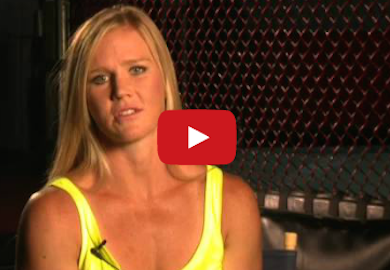 “Ronda is obviously the one to beat, she’s the one who has the belt. Is she doing great? Absolutely. I really admire her for going in and she’s been cleaning up. She’s got a lot of skill and she’s a big threat, but everybody’s also beatable. If I wouldn’t want that fight, then why would I be in this sport? If you don’t want to make it to the top, then you shouldn’t be doing this. That would be a fight that I would want to look into.”

Newly signed women’s UFC fighter Holly Holm discusses her new UFC contact, how her fighting style matches up with current UFC women’s bantamweight champion Ronda Rousey, and when she expects to return to the cage on AXS TV’s Inside MMA.