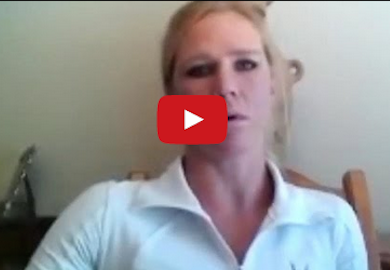 Newly signed female bantamweight, Holly Holm is already feeling the heat, and she hasn’t event stepped in the kitchen yet.

Find out why in this exclusive FOX Sports Interview

Holm on coming into the Bantamweight division: “It’s exciting. If you don’t want to beat the best, you shouldn’t really be in it. I just want to take one step at a time. I want to fight for the title. It’s one of my goals and dreams and I’m just going to keep shooting for it.”

Holm on recovering from her recent injury: “I’m almost 100 percent released from my doctor because of my arm. It’s coming along.”

Holm on improving her ground game: “I’ll never feel like my ground game is there. I need a lot of work. I still feel my jab needs improving.”

Holm on getting called out by numerous fighters: “It’s a lot of pressure. It’s exciting. I haven’t made it anywhere yet. I still have all the work ahead of me. But the fact that I have a target on my back, I like that. It motivates me and makes me want to train harder.”

Holm on how many fights away is she from Rousey: “I don’t know. I think I want it and I want it right away. Then I think, let’s take baby steps. I’ve never been one to choose a certain opponent. I’ll let the UFC pick. I want to take whatever is given to me and take one fight at a time.”