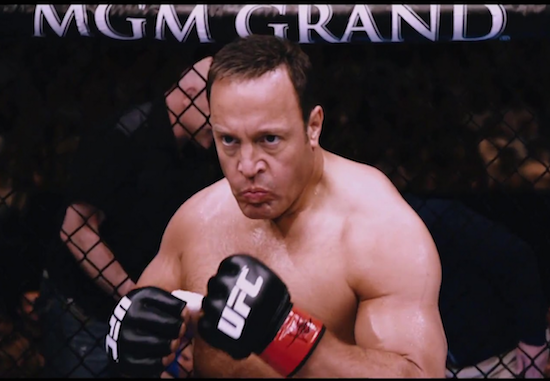 The inspirational combatant, did this at 52 years of age.

Two years ago the wrestling team needed money to continue, so Laurita, then 52, took and MMA fight. He lost a three round decision, but raised $3,000 and the team was able to continue competing.

“I wasn’t very happy with my performance. I’m a lot healthier now, a lot more ready, and I bugged my wife,” Laurita said.

His wife made him a deal: Lose 50 pounds, and you can fight. And that’s just what he did. He trained and dieted for months and was able to rally the whole school behind him. After years of being there for his students, they made it known they were there for him on fight night with more than 100 students and faculty there to support him. Laurita threw some good punches, gained top control and lasted through three, three-minute rounds with a fighter more than 30 years younger than him. He didn’t win, but that didn’t matter to the crowd.

After the announcement was made, they still rallied behind their dean and made it known that no one doubts his heart in the cage.

So what now? Laurita says he wants to fight one more time, but he’s not sure if his wife will let him. But he’s willing to make another deal with her in order to get back in the cage.