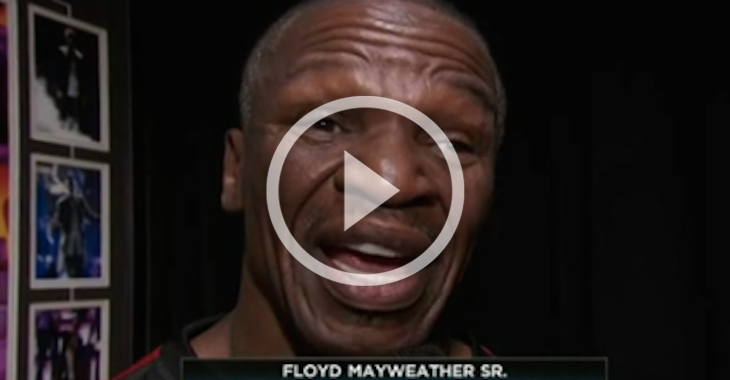 Floyd Mayweather has been quieter than usual walking into his bout with Manny Pacquiao. While Mayweather usually has to hype the fight up and talk trash to garner interest, he knows the fight sells itself and he can concentrate fully on training. The most trash talk that has come out of this fight was actually from Freddie Roah and Manny Pacquiao!

That all changed yesterday after ‘Pac-Man’ and ‘Money’ weighed in, though.

Floyd Mayweather Sr. took front and center stage as he was the highlight of yesterday’s interview. While Mayweather remained concentrated and Manny talked about religion, Mayweather Sr. ripped straight into Roach and his fighter for all the trash talk.

Floyd Mayweather Sr. wants to see his son whoop some a** tonight! The bout takes place at 6:00 PM ET and you can check out our live results HERE! Who do you have winning the big one?

After six agonizing years of anticipation and stalling, the combat sports world will be treated to pound-for-pound Boxing great Floyd Mayweather Jr. taking on fellow world champion Manny Pacquiao tomorrow night (Sat., May 2, 2015) on pay-per-view (PPV) from Las Vegas, Nevada. The festivities were kicked off today at the official weigh-ins (full results here), but the best highlight came courtesy of Floyd Sr. when he was asked about Manny Pacquiao and his trainer Freddie Roach’s trash talk. In his mind, “they’re going to get their ass whooped” for talking so much.