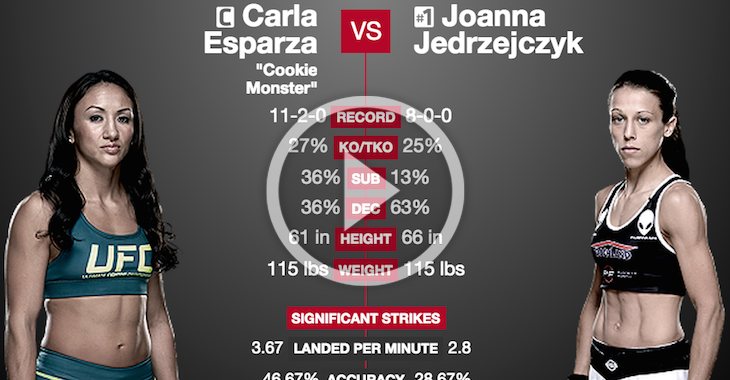 If there is one thing you should know about the hosts over at the popular MMA video podcast, Stud Show Radio, it’s that they do not hold back. No matter the topic being discussed you can be assured that Justin Buchholz and Chris Carlino aka Sir Studboy are going to speak their minds and say what they really think.

That was the case on the most recent episode when Buchholz spoke openly about his opinion of a certain title fight on a certain UFC fight card. If you missed the discussion then here’s a recap. The hosts spent a portion of the show looking at the fight card for the upcoming UFC 185 event. The event that features two title fights. The main event will feature lightweight champion Anthony ‘Showtime’ Pettis taking on Rafael dos Anjos and the co-main event will be champ Carla Esparza vs. Joanna Jedrzejczyk for the womens strawweight title.

The co-main event is where Buchholz had some issues. Check out what he had to say:

“Dude, the crazy thing here is that Esparza and Joanna co-main event. Like that’s ridiculous that that fight is the co-main event.”

“Yeah but I don’t care, there’s ten people in that division. The card is insane; like that fight should probably be the opener on the prelims. If you just look at their fight history, no disrespect I mean she’s the champion or whatever. But there’s ten people in her division. You’ve got Johny Hendricks, former world champion, vs. Matt Brown, the most exciting fighter ever, then you have Nelson/Overeem and Cariaso vs. the Olympic gold medalist. Then you have Pearson vs. Sam Stout and that’s just going to be a great MMA fight, like that stuff needs to be promoted.”

What say you BJPENN.COM readers, how excited for this fight are you? Sound off in the comments.