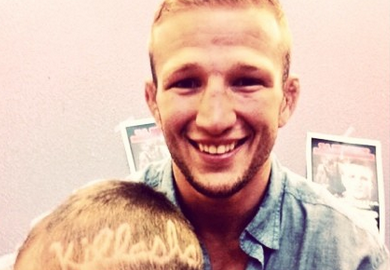 UFC bantamweight champion, T.J. Dillashaw is ready to silence doubters this weekend when he defends his title against Renan Barao, the former champ.

UFC Bantamweight Champion TJ Dillashaw on how he tops his last performance: “You’ve got to try not to. You can’t put pressure on yourself and try to outdo your last performance. You just have to go out and win.”

Dillashaw on if he has critics after winning the belt: “No matter what, you’ll have critics. You have to ignore them, know the hard work is what you have to do and just keep winning. You’ll always have critics and doubters.”

Dillashaw on how this camp is different with coach Duane Ludwig moving to Colorado: “Duane lived with me for this camp. He moved his family to Colorado and then moved back and has been living with me. For the last eight weeks, he’s been my roommate.”