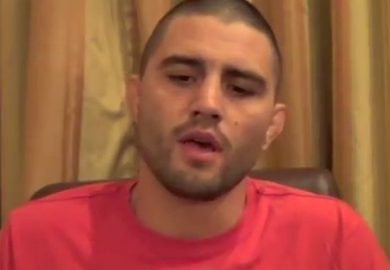 “I have nothing to lose. He’s out there, he’s got his friends, his family, everybody’s watching, he’s in his hometown, feel like all the pressure’s on him. I can just go out there and shine. It’s a very familiar role. I’ve found myself in this position time and time again throughout my career, and I really think that I thrive as the underdog, I don’t have a lot to lose, I don’t feel a lot of pressure. I can go out there and just have fun, do what I came to do, which is fight.”

“I’m expecting Georges to come into this fight with a lot more fire inside. I know he’s taken a lot of criticism in the past for his recent title defenses, he’s been out for a long time, and according to him he’s found all new motivation. I’m excited about that. I would love to fight the Georges who’s hungry, and wanting to go out there and really display his skills. That’s Georges St-Pierre is the best, and that’s the guy that I’ve admired and been a fan of for many years.”

“This is basically the culmination of 14 years of mixed martial arts training, a lot of dedication, a lot of sacrifice. On a lot of different levels it’s going to be very satisfying.”