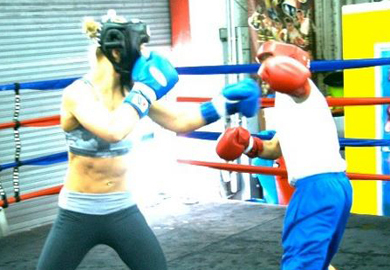 Much has been discussed when it comes to the striking prowess of Strikeforce female bantamweight champion Ronda Rousey. With very little cage time to critique and the grappling ability that has kept her undefeated in route to the world’s most coveted female title, Ronda Rousey’s striking capabilities are still an unknown factor in her MMA game.

Be it propaganda or not, Ronda Rousey’s head striking coach, Edmond Tarverdyan gave Ronda fans a glimmer of hope about the champs punching abilities when appearing on Sherdog’s radio network.

“What she has is amazing, but people don’t understand: Ronda’s boxing is so good right now,” said Tarverdyan. “If I could, I’d turn that girl into a boxing professional world champion. She was sparring with girls in our gym that are like 16-1 and WBA world champions, Lucia Rijker … and Ronda gets the best out of it.”

“Ronda has a great jab. She does like six in a row when we’re doing pad work and mitt work. In the gym she’s also working that jab. It comes natural to her. She always had her left foot forward when she was doing judo tournaments, so she’s real comfortable with sticking that jab and grabbing them and taking them down.”

“I was like, ‘OK, this girl is going to be something special. I started working with her. For like six months we didn’t do any striking. Just footwork, distance, understanding. I didn’t give her hard sparring, nothing like that. Just she moved around with me. I have control of my punches and I’m not trying to swing your head off and I’m technical and I could teach her. More like drilling-sparring, like amateur style, than actual just banging like the professional style. I taught her a lot of amateur boxing. Once I got that done, I know she has a good jab. She has a good straight punch, a right straight. She knows how to move her head. She knows how to defend herself, block punches, move in and out, use her legs, and then I started just gradually raising her sparring. For the last camp we had great sparring partners. That’s how you learn.”

“Ronda’s jab is looking really, really good. All the Olympians I have in my gym, and world medalists, they just sit down and go, ‘Wow, dude. She has a great jab.’”

“Now everybody knows she can strike,” Tarverdyan said. “I don’t care if people know or don’t know, to be honest with you. I know she can strike. She’s a great striker. She’s not going to have a problem with any of these fights we have in front of us.”