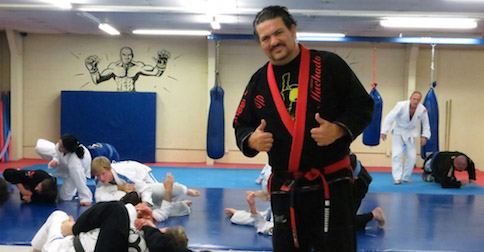 If you’re a fan of mixed martial arts then it’s almost impossible not to know what BJJ stands for. Even the casual fan, watching free UFC fights on FOX Sports 1, have listened to commentators and analyst talk about Brazilian Jiu-Jitsu, or just jiu-jitsu. Even the most uneducated spectators can hear those words and understand that it’s the “ground stuff”, or “choking moves”. So then, why isn’t the sport of jiu-jitsu as big as a spectacle as mma? Why aren’t those same UFC fans looking for high level BJJ matches to watch on the weekend? According to a huge name and legend in the sport, it’s because it’s boring.

Rigan Machado, an 8th degree red and black belt in Brazilian Jiu-Jitsu, spoke with BJPENN.COM about the sports current lack of appeal and what he is doing to try to change that. Machado, who earned his rank under Carlos Gracie Jr., feels that the sport as it is today is boring and not exciting to watch, which is why it has yet to find its mainstream success.

So Machado, along with Mathew Tinley, created the Jiu-Jitsu World League in order to try to bring the sport to the next level, “We try to make the jiu-jitsu more aggressive, more exciting”, said Machado when explaining the creation of the league. He says that with all the rules in the sport today that it’s not exciting to watch, competitors just try to hold or stall. So for their league there will be new rules that encourage aggressive grappling and penalize stalling, “We want to make this sport so exciting for people to watch.”

Another frustrating aspect of the sport is the reality that competitors will sign up for a tournament in a specific division because they see that there are not many people in that division, meaning that it wouldn’t take much for them to get a medal of some kind, just by competing one or two times. Machado wants their championship belts to be deserved and earned, “I don’t want people to come, sign up and have one fight. I want to make sure each fighter that signs up in my league has at least 3 to 5 fights to deserve to get the belt,” he continued, “You prove yourself, you deserve to get the belt, that’s us.”

For those who don’t know, Machado is known to train a few celebrities at his gym in California. So just for fun we asked the legend which celebrity has the best grappling skills. It turns out it’s Kelso from That ’70s Show. That’s right, when asked who had the best skills Machado said, “I think Ashton Kutcher.” Machado even gave a breakdown about why he thinks the star is so talented, “He’s a phenomenal wrestler, I think people don’t know, but his background in wrestling is a very high level. I was shocked.” He said that Kutcher really loves jiu-jitsu and could probably do very well as far as competing because he has the right body for it, “He has the long legs, the body size like Roger Gracie. Great balance as a wrestler.”

If you’re in the Southern California area you can check out the big event taking place in Irvine, CA at the Bren Center at the University of California on Jan. 17.