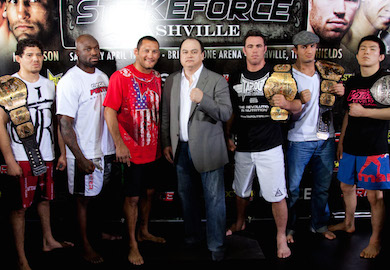 With all this Scott Coker talk, let’s take a walk down memory lane and revisit the days of Strikeforce past. Strikeforce of course was the promotion that Coker founded and ran for its entire existence until Zuffa bought and eventually closed it down. March 12, 2011 is when Dana White announced the purchase, but explained that the rival promotion would still function as a separate organization and Coker would remain at his position.

That was a massive news story considering Strikeforce was seen as the definite #2 MMA promotion behind the UFC. Many of the big name fighters on Strikeforce’s roster were brought over to the UFC but the company went on putting top-level events together. The last of these events took place on January 1, 2013. Strikeforce: Marquardt vs. Saffiedine was the promotions farewell because after that it was shut down and dissolved.

Coker started Strikeforce as a kickboxing promotion all the way back in 1985, and when it was done it was the second biggest MMA organization. There’s no doubt that Coker has a passion for this sport and the business. Coker is a martial arts guy through and through. He’s actually a 5th degree black belt in taekwondo and has devoted a major portion of his life to promoting kickboxing and MMA. Coker understands the position and what it takes to build something up to its highest level. He’s gotten praise from just about everyone in the business including Dana White, who was once quoted saying, “This sport needs more guys like Scott Coker. He puts on a good show and I think if you talked to his fighters about him, they’d all have good things to say.” Coker has nothing to prove, but with this move to Bellator all MMA fans should be excited to see what he can do with another MMA promotion. Plus, the guy was in Surf Ninjas.