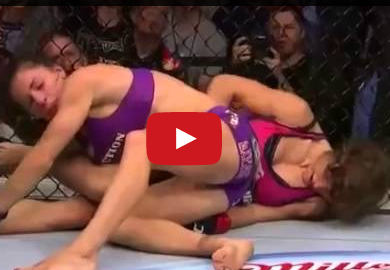 With the recent signing of Holy Holm, the return of Cat Zingano, and the signing of Gina Carano on the horizon, there is much talk as to who the biggest threat is to Ronda Rousey’s UFC bantamweight title. Lets take a look at some of the most devastating finishes from Rousey’s biggest threats.

Next we’ll take a look at Cat Zingano, who will be making her return to the Octagon at UFC 178 in September. Here we can see Zingano successfully make her UFC debut against Miesha Tate at the TUF 17 Finale in April of 2013.

Next we have WMMA legend Gina Carano’s walkaway knockout win over Rosi Sexton back at World Pro Fighting Championships in 2006.