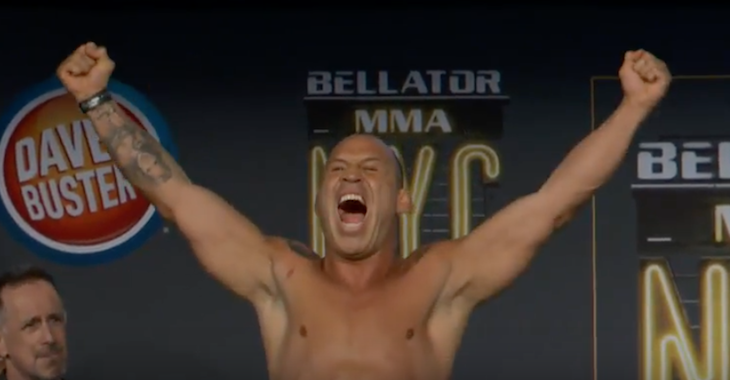 The pair coached opposite against one another on TUF Brazil, and were scheduled to fight in 2013. Silva refused to submit the proper paperwork for licensing, before then refusing to take a drug test. Subsequently, ‘The Axe Murderer’ was pulled from the event. Interestingly enough, after the UFC tapped Vitor Belfort to step in for Wanderlei Silva, Sonnen was pulled from the fight for failing a drug test. After both serving suspensions from the NSAC, the pair signed with Bellator MMA, and met in the Octagon this past weekend, where Sonnen picked up a rather lopsided win over his longtime rival.

This week, Wanderlei Silva spoke about his desire for a rematch with Sonnen in Brazil, and explained why he shoved Sonnen on his way out of the ring, in an interview with Combate: “I was as mad at him as I was mad at myself. I wanted it to be a dog fight, thrilling, with guys being knocked down left and right.” Silva told Combate. “The type of fight people are used to see Wanderlei Silva in. Unfortunately, my opponent wasn’t too keen on putting on a show, he wanted to smother and grapple me. I like to make the crowd go wild, give them a show. The few moments where he engaged me were the best moments. I came close to finishing the fight. I had the best moment of the fight. Because of the rules, I knew he had defeated me by points.”

“I want the rematch bad, I want to show I can neutralize his gameplan and beat him. I’ll pursue it to the end. I’m getting ready for it, as a matter of fact. It might not be my next fight, but it’s bound to happen. Brazil has many venues. Here in Curitiba there’s the stadium where they hosted UFC 198. I’m sure that if Bellator ever comes to Brazil, this would be a nice place. And with Silva on the card, a packed house is guaranteed.”