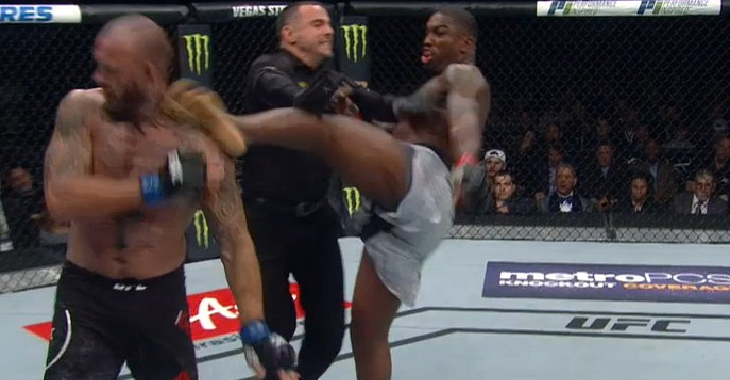 It wouldn’t be a UFC card in New York without a little bit of controversy. Walt Harris had Mark Godbeer in a bad way, but due to a questionable glancing knee and a follow-up illegal kick, he ended up losing the fight in a rare disqualification. The referee was running and yelling at Harris to stop the action, but Harris followed through with his technique and Godbeer stated he could not continue. After speaking to Dana White at UFC 217, Walt Harris decided he will appeal the official decision.

“I spoke with Dana right afterward, and he told me to contest it. He told me to appeal it. He said he felt like, you know, there’s a replay and I had a chance to win if I appealed. And that’s what I’m going to do. I feel like, at worst, it should have been a no-contest. If you remember, Curtis Blaydes and Aleksei Oleinik had the same type of situation, and they gave Curtis the win. I don’t understand how mine just went straight to a disqualification when there was conclusive evidence on the replay that the knee didn’t land low and I was in the heat of the fight. It wasn’t like the ref had put his hands on me, stopped my momentum, and then I took off and went and hit him. I was in the middle of a combination. So, to just go straight to a disqualification is like – I don’t understand it.”

DQ? No way No contest if anything! @MarkGodbeerUK wanted out and he found a way! #LossForTheFans

“[Mark Godbeer] said I cheated; he said he’d fight me again. I’m like, ‘Bro, you had the chance to fight me. Take your five minutes, and then get yourself together and come back and fight.’ He took the easy way out. Point blank, period. I don’t care what anybody says. He took the easy way out. He knows it. His camp knows it. Everybody in that arena knew it. So don’t sit here – he’s yelling and screaming back and forth with me. I basically called him a b-tch. Because that’s what I felt in the moment. He b-tch’d out. He took the easy way out. He knew he was losing the fight. And he knew it was just a matter of time before I put him away. He quit, bottom line. I feel like he could’ve continued. There’s been numerous fights where I was hit low.” — Walt Harris speaking to MMA Junkie.

Walt Harris went on to say that Godbeer is actually the one who cheated him – and the fans – by not continuing the fight. There haven’t been many instances where a decision was overturned, but perhaps with the new instant replay they can analyze the tape more deeply and discover some truth in what Walt Harris is saying. Don’t expect a rematch anytime soon though, Harris said he doesn’t see the point.

Oh and I’m contesting that BS! Godbeer is a bitch! #UFC217