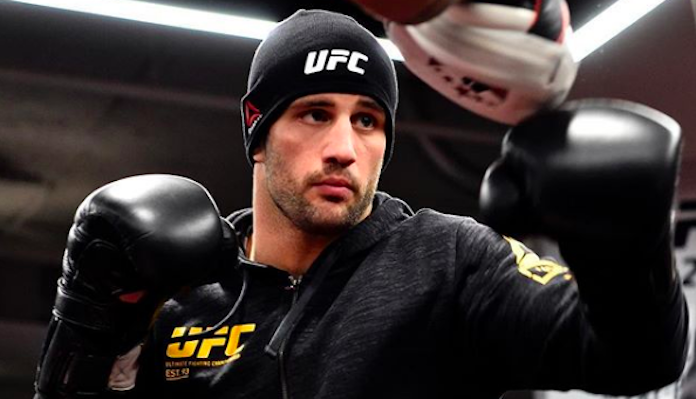 On Saturday night, in the main event of UFC Moncton, Switzerland’s Volkan Oezdemir attempted to rebound from a failed title bid to Daniel Cormier with a win over streaking contender Anthony Smith. Unfortunately for Oezdemir, this mission didn’t go as planned. Instead, he was submitted by his foe in the third round.

Post-fight Volkan Oezdemir discussed his loss to Anthony Smith. While the Swiss knockout artist was careful not to take away from Smith’s victory, he say he had a little bit of trouble due to a lingering nose injury.

“I broke my nose twice during the fight camp, and I guess I wasn’t ready for a fight, for a real blow,” Oezdemir told the media post-fight (via MMAjunkie). “I felt confident. I felt good. I felt I won the first two rounds. The third round was going really well, but as soon as he took me down and started for the choke, I also felt some blood coming out in my throat, and he made me give up the fight, make me choke.”

While Volkan Oezdemir eventually came up short, things were certainly going his way early on. That said, he wasn’t surprised when Smith surged back later in the fight.

“His nickname is ‘Lionheart,’ so I knew he would be surviving and feeling more powerful as long as the fight goes,” he said. “That’s a little bit how he fights. That’s something I was getting ready for, and that’s why I wanted to pace myself in the fight. I wasn’t true to myself, because as soon as I felt the connection, I didn’t want to go for the finish.”

When asked to shake the proverbial magic eight ball and predict his next move, Oezdemir said it’ll take some time to figure that out.

“Now that we are coming off a loss, I’m going to have to figure out my next plan,” Oezdemir said.

What do you think the future holds for Volkan Oezdemir after his back-to-back losses to Anthony Smith and Daniel Cormier?