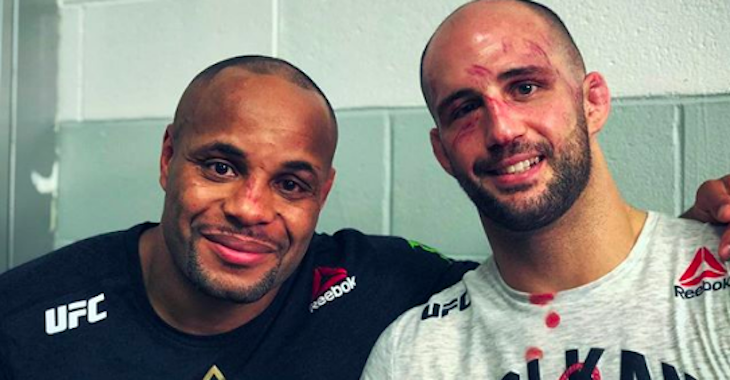 Last night, in the co-main event of UFC 220, Volkan Oezdemir attempted to succeed where 20 other men have failed, and defeat Daniel Cormier. Despite a strong start, Oezdemir quickly fell victim to Cormier’s incredible pressure and wrestling, and ultimately succumbed to a second-round TKO.

This loss is Oezdemir’s first in the UFC. Apparently, however, he’s taking it in stride.

Post-fight, the Swiss knockout artist took to Instagram to share a photo of him and his adversary backstage. In the caption for this photo, he praised Daniel Cormier, promised to come back stronger, and thanked his fans.

So much respect for you @dc_mma. You deserve this title. It’s just the beginning for me, I’ll be back soon and stronger 💪🌋 thanks to everyone for the Support, you guys are amazing! #Notime

Oezdemir echoed these sentiments at the UFC 220 post-fight presser.

“I don’t think he has bad striking at all,” Oezdemir said (h/t MMAFighting.com). “He has this dirty boxing style and it just suits his style, suits his body type. He just boxes really good for his style of fighting and definitely, he’s not going to be the Glory champion facing kickboxers in a kickboxing ring, but in MMA he’s able to stand with anybody. It was the case in all his fights. He takes people down and at the end of the day, he’s just going to go forward and punch them and kick them. So I know he has good boxing because this is to capitalize on his wrestling. I know he’s also dangerous in the standup.”

“It’s fighting, so you gotta go or you’re gonna get knocked out,” Oezdemir said. “Basically you just have to move, you have to get away from that position, but I got stuck and I was able to keep going, definitely. I mark really easily on my face, I get red super easily, but I wasn’t really rocked. Definitely, I would have taken a lot of damage so the referee stopped the fight.”

What do you think the future holds for Volkan Oezdemir?