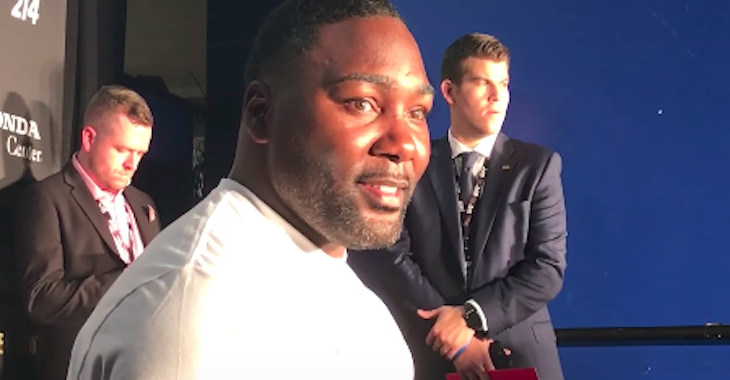 Last night, in the first bout of the stacked UFC 214 main card, Switzerland’s Volkan Oezdemir stepped onto the canvas with British knockout artist Jimi Manuwa in perceived light heavyweight number-one-contender fight. Though Oezdemir entered this fight as noteworthy underdog, he passed his test with flying colors, mauling his accomplished foe to a first-round knockout victory.

Because this bout was just Oezdemir’s third in the UFC, his emphatic defeat of Manuwa might have come as a bit of a surprise to many members of the MMA community. Former UFC light heavyweight title challenger Anthony Johnson, however, was not surprised at all. Having spent the last few weeks training with Oezdemir at Combat Club in Lantana, Florida, he is well aware of what the Swiss bomber is capable of.

“Volkan works very, very hard,” Johnson told the media of Oezdemir. “From the moment he signed this contract with the UFC I have never seen anybody work as hard as he has. Every day in the gym, he will come there and push himself to the max every single day. Since his first fight, with [Ovince St. Preux]. He’s been in the gym non-stop.”

Having knocked out Manuwa, Johnson now feels that Oezdemir deserves a title shot against Jon Jones, who reclaimed the belt in UFC 214’s main event.

“He deserves it at this point,” Johnson said. “[Alexander Gustafsson] has had two title shots, I had two title shots. They need some new blood in there, you know what I mean? And Volkan is definitely making waves now, beating Jimi the way he did. I knocked Jimi out in the second-round. Volkan just did it in like two minutes or something like that? He made me look bad. Y’all don’t understand how excited I am for Volkan.”

What did you think of Volkan Oezdemir’s win over Jimi Manuwa?