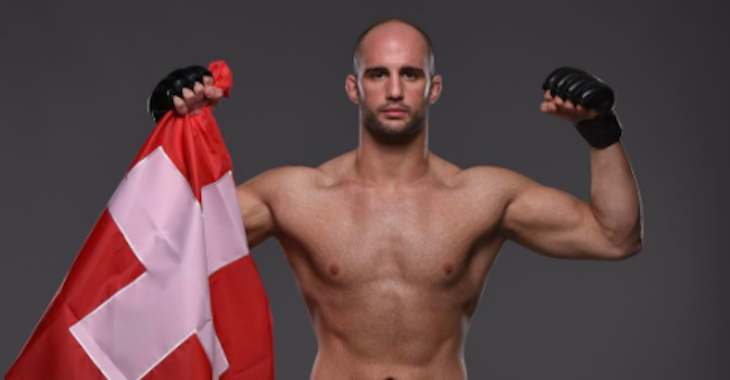 This weekend, in the opening bout of the UFC 214 main card, Swiss striker Volkan Oezdemir will collide with British knockout artist Jimi Manuwa in what is widely perceived as a light heavyweight number one contender.

Earlier this week, Oezdemir took time out of his busy fight week for an interview with BJ Penn Radio. During this interview, the Swiss upstart broke down his looming matchup with Manuwa, and gave a very bold prediction for the fight.

“This fight will be a very exciting fight because we’re both in-range fighters,” he said. “We like to bang, we don’t like to give up position, and we’re not trying to run away and try to score points. So it’s just going to be a really good fight, and an explosive fight. This is the kind of fight that’s not going to go past the first or second round. That’s what I’m going to do. I’m going to go full power, and I’m going to knock Jimi out in the first round.” While Oezdemir admits he will shoot for a takedown if he sees the opening, he quickly reiterated that his ultimate goal is always the knockout.

“I’m a standup guy,” he said. “I like to bang, but as soon as I see an opportunity, I’m not going to waste it. It’s fighting, you know. If I wanted to do kickboxing I would have stayed doing kickboxing or K-1. I did a few fights in kickboxing, but what I really like is MMA. The game is mixed, but my goal in MMA is to knock somebody out, whether it’s on the ground or on my feet. I’m just going to try to put them away.”

Do you think Volkan Oezdemir can get past Jimi Manuwa at UFC 214? If he does, do you think he deserves a light heavyweight title shot?