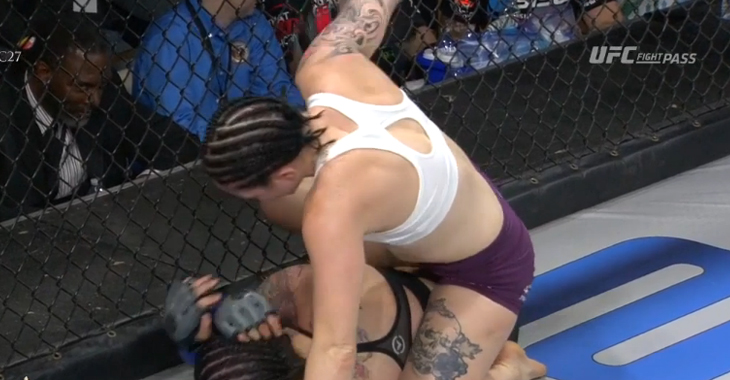 Mallory Martin is making up for time in big and terrifying ways. She was sidelined last year due to a staph infection, but she came out guns a’blazing at Invicta FC 27 against Tiffany Masters. Martin put in a dominating performance than can simply be described as scary. It was something that reminded a lot of people — including herself — of Khabib Nurmagomedov’s performance against Michael Johnson. That was because as she was earning her TKO victory in the second round, she was talking to her opponent while she did it.

Powerful post-fight interview from @MalloryyMartin after a dominant stoppage in her return to the @InvictaFights cage tonight! @tigermuaythai #InvictaFC27 #UFCFIGHTPASS pic.twitter.com/IpQwP02BbN

Later she would refer to herself as a well-earned ‘Lil’ Khabib’ nickname. We don’t know what’s more intimidating; the ominous talk during her finish, or the primal screams following the judge stepping in to end the fight. That is how you make a comeback. Needless to say, she made the best of her moment and that a lot of eyes are going to be on Mallory Martin whenever and wherever she fights again.