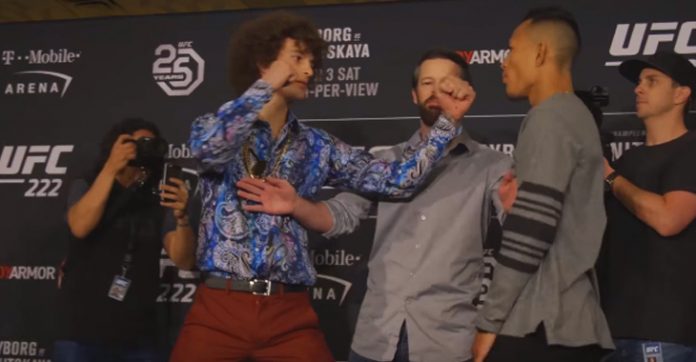 For a fight week Thursday, things have been mostly quiet. The UFC 222 card has suffered a triple threat of changes including two late replacements, so it’s understandable that not a lot of heat is coming from the pay-per-view card. That’s not stopped Dana White’s Tuesday Night Contender series prospect Sean O’Malley for trying to add excitement. Although, it was his opponent that caused a scene today at the UFC 222 media day staredowns by slapping at O’Malley.

“Ever since I was a little dude, I was always trying to entertain everyone I was around. I was trying to be the center of attention and I brought that into this sport. Now, look at me. All the people saying, ‘Why are you marketing this guy?’ It’s me, marketing myself, giving them content to push.”

Andres game plan, lay on top of me . #getchoked #getkickedinthehead

“You go out there and throw the kicks I’m throwing, do what I’m doing. Knock out people. Be wild, be yourself, be crazy, and you’ll get promoted too. I see a lot of hate, but it’s fine. I spar hard twice a week in camp, and I put on a show in sparring, too. It’s not like I have to go out there and try to do this. I go out there and do what I do, and that’s the ‘Sugar’ show. It just works out. It’s just my style.” — Sean O’Malley speaking to MMA Junkie.

Sean O’Malley has promised we’ll see his best performance yet at UFC 22, but his opponent former CES MMA bantamweight champion Andre Soukhamthath threatens to drown O’Malley and steal all his hype. If O’Malley can prevent that and put on one of his infamous performances he’s become known for, then his rise gets another rocket boost. His fight sits at a primetime slot right below the co-main event on UFC 222’s main card, which is the biggest spotlight the flashy fighter has ever had.