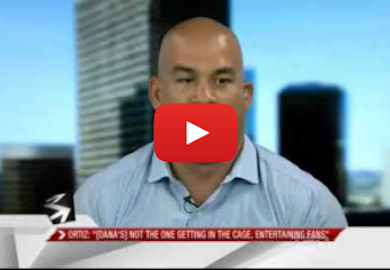 “Dana White is an excellent promoter,” said Ortiz. “He goes out and promotes the sport for what it is. But he’s not the one getting in the cage, that’s entertaining the fans who are watching and buying the pay-per views.”

“Fighters are the ones who are stepping in and putting our lives on the line and (providing) entertainment for fans to watch the fights.”

“Myself and Ken were probably the ones who sold the biggest pay-per- view fights to date.”

“If Dana White didn’t have you, Chuck, me or Frank – for him to be able to make the money off our back, our sweat, our blood. Where would he be?” asked Shamrock. “Without the charisma and talent that we, Dana wouldn’t have a job right now. ”

“I can’t really talk much on [the debt owed to the UFC],” said Shamrock. “It’s a legal thing. And right now, it’s still being worked on. It’s kind of funny when people talk about owing. If you look at how much money was made in the UFC when I was there, and the buy rates that were being brought in, and the idea that Dana White was going under when I came in. I told him that I promise you that these buy rates will jump over 100,000. He didn’t believe me. Then lied to me about what the buy rates were because he didn’t want to pay me what I was supposed to get. So when you talk about someone owing you money … it kind of really makes me angry.”

“If anybody owes money, he owes the fighters money.”

“Reasonably?” asked Ortiz. “Not Reasonably. I’m well off for the surgeries that I’ve had. And the things I got to look forward to when I’m fifty, sixty years old, no.”

“I look at a guy like Floyd Mayweather who makes 42 million dollars for a pay-per-view. What am I doing different that this guy is doing? I’m not just sparring, I’m going there trying to hurt a guy.

“I think you’re forgetting we’re the fighters, we’re putting on the show.”