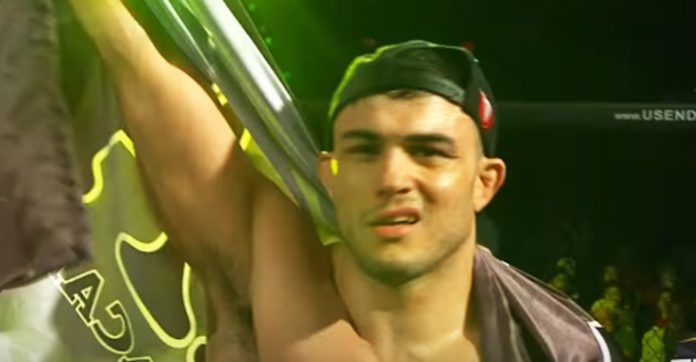 If you don’t know Nick Newell, right now is a great time to find out. He’s one of the top prospects outside of the UFC with or without both of their hands. Since 2009, the fighter has racked up 14 wins, a regional title, and 2013 Submission of the Year in Word Series of Fighting. Last night he came out of retirement like a man possessed and neck cranked Sonny Luque at Legacy Fighting Alliance in the first round and put his foot down with a declaration to Dana White: ‘I belong in the UFC.’

Newell says he belongs in the UFC and gets a mic drop assist. I don’t disagree, the man brings the violence. Give him a shot already. pic.twitter.com/8RrvlXlL7E

“[My message to Dana White saying you’d have to be crazy to fight with only one hand is] that I am crazy. I am crazy. I’m a baddass and I’ll wipe out that division. It’s not even a question, it’s just give me the oppurtunity, send me over the papers and it’s gonna happen. It may baffle some people that there’s a guy out there that only has one hand that beats people up, but to me it’s not crazy because I’ve been working my whole life for this.” — Nick Newell speaking to TMZ Sports.

You may not know Nick Newell, but you’ll know the person who gave him his only loss in his entire career. Former WSOF lightweight champion Justin Gaethje finished Newell at WSOF 11, and we all know what happened to him. Now he’s ranked six in the UFC’s lightweight division, a weight class Newell sees himself running if he can just get a shot. There have been prospects signed to the UFC with questionable records or off of just one exciting finish. Well, Newell has finished 11 of his 14 opponents. Where’s that call, Dana?

@NotoriousNewell with a dominant win in the @LFAfighting main event.