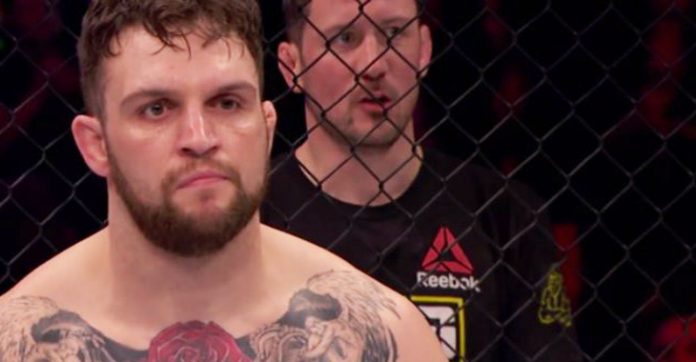 You may not know who John Phillips is, but chances are you will after UFC London this weekend. He’s been waiting for his shot at the UFC for over a year now. With his UFC debut mere days away, Phillips can finally say he’s made it to the big leagues after successful fights in Cage Warriors and BAMMA. So where is a guy who is about to fight for the biggest MMA organization in the world staying? In a caravan parked in his coach’s yard.

“When I first came over [to Ireland] I stayed in an Airbnb. It cost me a lot of money and I couldn’t really afford it if I was going to be here full time. […] I came up with a plan that I would sell my jeep and buy a mobile home. […] It was actually okay for a day or two. I guess when most people use this kind of living space they’re on holidays. They’re out for the whole day with the missus and they only have to come home and sleep in it — they only spend a very short amount of time in it. I was in that f-ckin’ thing for three months solid. I could’ve done more research. I just got a van that I liked the look of.”

Good to see my boy @JohnPhillipsmma making his debut. Guaranteed fireworks with us performing ☝🏾 pic.twitter.com/dbKtawQum2

“I couldn’t even stand up in it. Anything I was doing in there, I had to be sitting down. So you’re making food sitting down and everything…it was a nightmare. Obviously, there was no toilet — that made things pretty complicated. Especially when the gym was locked and the gate is locked and I’m thinking, ‘I’ve got to go’. There were some dark moments there.  Luckily, now I’ve moved up to a caravan. It’s an old battered thing, but it was free and it’s definitely an upgrade from the mobile home,. Don’t get me wrong, it’s a piece of sh-t, but it’s dry and it’s warm. It’s got a cooking area and it’s got a bed. It’s got a living room kind of area, so it’s like an apartment, really.”— John Phillips speaking to MMA Fighting.

Irish, caravan, fighting? This is starting to sound like Guy Ritchie’s ‘Snatch’. John Phillips will close out the prelims with his fight against Charles Byrd before the main card starts. With a solid bonus, he could probably afford to change his living arrangements. Maybe he could even sell it to Clay Guida or Donald Cerrone, both caravan aficionados. UFC London goes down on Saturday all on Fight Pass.