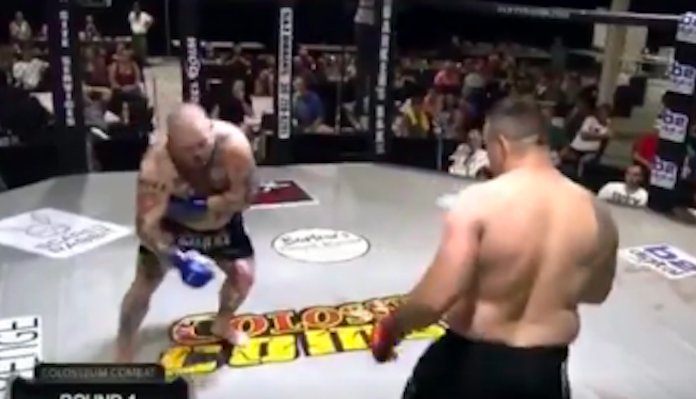 Travis Fulton is perhaps the most unheralded legend in MMA. Although there are no major world titles on his mantle, he has fought upward of 315 times against all manner of weekend warriors, prospects, veterans, and legends. He has battled inside the enclosures of the UFC, WEC, Pancrase, and pretty much any Iowa promotion with the wherewithal to set up a cage in a church basement or back yard. In the past, he’s shoehorned over 40 fights into a single calendar year. No, he’s not your traditional MMA legend, but he’s a legend all the same.

Last night, the journeyman added another fight to his crowded resume, and it was a weird one. In the main event of Colosseum Combat 45, Fulton met the errr… eccentric… Jonathan Ivey, a fighter with nearly 100 pro fights of his own. Oh — Ivey also has a tattoo of Fulton on his leg, which should give you a sense of how much he respects him.

Here’s how it all went down (h/t @Grabaka_Hitman on Twitter).

First, a bit about Ivey:

"The Ironman" Travis Fulton (255-54-10, 1 NC) about to fight THE Johnathan Ivey right now. Yes, that Jonathan Ivey. This should be bad and hilarious. https://t.co/c45sruskNB pic.twitter.com/ufkLXucx2s

When Ivey went to Pancrase https://t.co/JL5mQXE7yw

And now, the facts on Fulton:

It sincerely bothers me there's now MMA fans who don't know who Travis Fulton is.

And finally, the main event… the fight itself:

So to recap.. Johnathan Ivey fakes a heart attack, drops Travis Fulton, proceeds to follow up with GNP… then decides he can't punch his idol in the face anymore and taps out. #mmathings pic.twitter.com/grK54YhOe0

So there it is. Ivey fakes a heart attack (or something), drops Fulton, showers him with ground strikes, and then, on the very cusp of the finish, stands up and taps out due to his immeasurable respect for his journeyman foe. Only in the noble sport of MMA.

With this submission loss — that’s how this fight will appear on his record — Jonathan Ivey is now 41-57-0 overall.

Travis Fulton now has the kind of record that can no longer be accurately recorded, in the same way that we cannot count the stars. Somewhere along the line, even the most reliable MMA databases lost track, failing to account for all of his shadowy fights in community center basements, small-town ice hockey rinks, and spavined barns. According to most sources, though, he’s now somewhere in the area of 256-54-10 overall. Let that sink in.