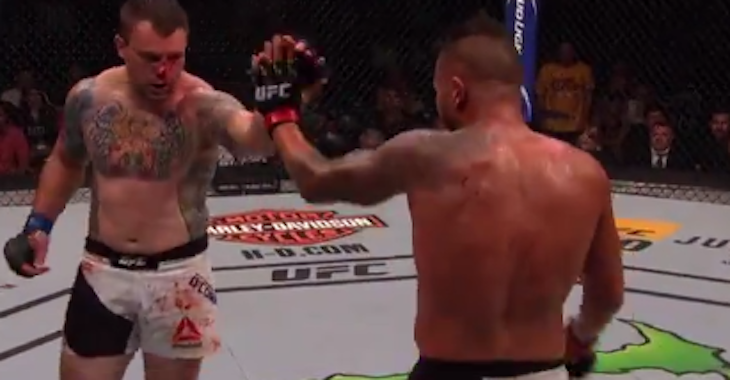 When we talk about the best light heavyweight fights in UFC history, there are a few fights that quickly jump to mind. Jon Jones vs. Alexander Gustafsson. Dan Henderson vs. Mauricio “Shogun” Rua 1. Forrest Griffin vs. Stephan Bonnar 1. Daniel Cormier vs. Alexander Gustafsson. Chuck Liddell vs. Wanderlei Silva… One fight that is often forgotten, however, is Steve Bosse’s incredible battle with Sean O’Connell. This frenzied fight occurred one year ago today, when the UFC debuted in the Canadian capital city of Ottawa, Ontario.

The action between these two light heavyweight sluggers began quickly, and it was O’Connell who landed hard first. In the first half of the fight, the American dropped his French Canadian foe repeatedly, easily with enough severity that a stoppage would have been justifiable. Luckily for Bosse, however, the referee allowed the fight to continue, which gave him the opportunity to surge back and batter O’Connell to the edge of consciousness.

By the time the fight ended, the judges decided Bosse had done enough to earn a unanimous decision, but truly, there was no loser in this fight.

On the one year anniversary of this wild war, the UFC has shared its slobber-knocking highlights in an effort to coax fans into memberships with Fight Pass, where the fight can be viewed in full. See those highlights below:

#OnThisDay in UFC history – Steve Bosse & Sean O’Connell put on one of the GREATEST LHW matches OF ALL TIME.

OF. ALL. TIME. ⬇️ pic.twitter.com/q6LOSWlnpQ

Where do you think Steve Bosse vs. Sean O’Connell stacks up on the list of best fights ever?