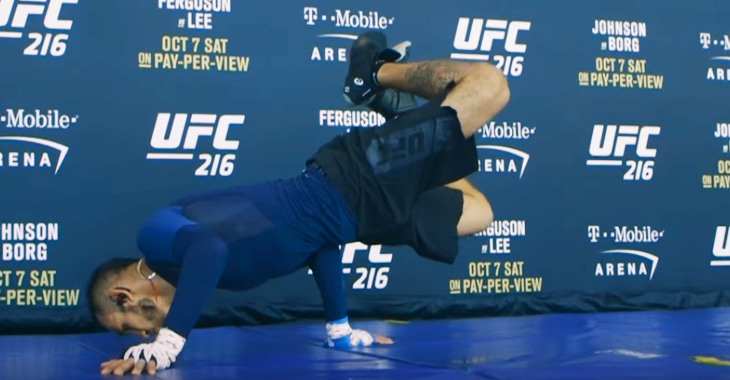 Back during the build-up for UFC 209, Tony Ferguson called himself the new John Wick. Well, we’re starting to believe him. First of all, he’s been secluded at a camp he built himself in California’s Big Bear. It’s secret, there is no huge team surrounding him and glossy posters of his face. What we get from his camp are personal Instagram videos of him doing ridiculous things: Elbowing speed bags, yoga, integrating Capoeira striking, you name it, he’s done it. You’re talking about a guy that looks at a laser maze as a active rest training device. So, it should be no surprise when it came to his UFC 216 open workout yesterday. Yet still, we’re surprised.

Ferguson might be the P4P workout king right now. He’s approaching an hour with no sign of slowing down.

Hold up. Wait a minute. Did he just? Tony Ferguson is seriously out here choking guys with their own arm while standing up and then hitting them with some sort of modified Stone Cold Stunner. Bah gawd! While it’s unlikely that Ferguson sends a font kick into Kevin Lee’s solar plexus, wraps him up in a D’arce choke and sits down with a pro wrestling neckbreaker, don’t count it completely out. That’s one of the crazy things about El Cucuy, not only does he practice some bonkers techniques, he actually pulls them off in fights. We’ll get to find out exactly what Ferguson can do to Kevin Lee on Saturday night at UFC 216.